The first time that I ever saw this tall,

middle aged man with that scruffy gray beard, I knew I had to have that.

Hey there! My name is Chevy and I live happily with my pet Mark, his pet Sharon and their pet Anthony. I also live with my cousins, Festus the mule, Bob the cat and Daisy the dog.

We live way out in the country where I spend my days working security around the 1/2 acre area around our house. It’s exhausting work but somebody has to do it and Festus is too busy just eating all of the time. There’s so much area to patrol and so many possible offenders lurking. I mean there are literally gazillions of homeless squirrels around our house that have to live in the trees.  I actually feel sorry for them because they’re always sitting up on limbs and begging for food. But, I mean, who KNOWS really what they’re capable of doing if we let them into our homes? The have huge teeth and beedy lil eyes. Very seedy looking characters rustling about in trees and acting all dodgy when they’re on the ground. Nope, no begging squirrels at my pet’s house. Not on my watch.

I could work security on a much larger area than the half acre around our house, but I’ve been told that it’s too dangerous beyond the half acre that my sexy red necklace makes sure I don’t wander outside of.  I’ve argued with them over that because of my 85 lb frame, I’m pretty sure that I could take on the largest squirrel there was out there. But if I get close to the edge of the perimeter, I get a little beep that Mark says is a reminder that he doesn’t want anything bad to happen to me.

So, here is the first day I met my cousin, Daisy.  See how excited that she is to see me? She likes to act like she’s all scared of me; ears all sprung up. But she’s just pulling my leg when she acts like that. Me and her played that day for what seemed like hours. She LOVES to play hide and seek. 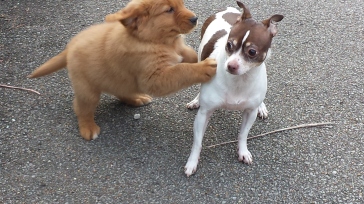 She always hides from me and I seek her.

Sometimes in the summer, Mark takes me in his truck (that he named after me!) to the lake and lets me swim. I would enjoy the swim a lot more if he’d stop losing the ball in the water and asking me to go get it for him.

Sometimes he takes me to the Sonic. What a great place! People are just roaming around everywhere and carrying food to cars. I’m pretty sure I could help them carry the food to the cars, but Mark says that’s too dangerous of a job. I mean, how dangerous can it be carrying a hamburger to a Prius?

Here is a pic of me the winter I learned to make snow brownies.

When I was younger, I was always getting in trouble for grooming, trimming and rearranging things. Like this little tree right here.

I worked for hours  on trimming it back the way it should look and nobody appreciated it.

They also didn’t like the designs I chewed into  the doormat, towels, or a delivered Amazon box. Sometimes these guys around here have no sense of style or design.

My day usually starts by clanking my metal food bowl on the concrete floor to let Mark know that I am awake and he needs to come rub my head, over and over and over. He raises the garage door, so I then rush to relieve myself on his favorite rose bush.

There has usually been a homeless squirrel or 2 that needs to be corrected and chased off. I need to go check on Festus, poke Bob the cat on the front porch and make sure he’s up. Bob sleeps under the front porch. Odd, because that’s about the only space that I can’t get into.

I spend the rest of the day sleeping and waiting on someone to bring something here, the UPS or Fedex man, the mail man, they’re all my friends. In fact, I’m pretty sure that everyone, even the homeless squirrels, are my friends. 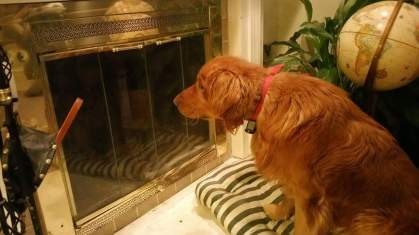 The one thing here that really bugs me around here is that other dog that lives in the fireplace.

He’s rude and always staring back at me and he mimics every move that I do. Like it’s a dare to see who can do it the longest. He even barks like me. I fret over the dog in the fireplace. But everyone else say he’s fine to not worry about it. Whatever.

The happiest part of the day is when I hear Mark coming up the driveway home from work. I know that pretty soon I’m going in for a snacky wack, a visit with Daisy and later we’ll get some bellyrubbing, Frisbee or ball tossing in.

I hope you enjoyed what I had to say. I have a lot to say that’s very important and people love to listen to me. But for right now, I’ll say goodb…

9 thoughts on “Life According To Chevy:”

Please leave a reply, Mark would love to hear it.

Search this blog for stuff

37 Things To Do Before We Get Old

Click To Read The Top Viewed Posts On My Blog

Americana Is Alive And Well. In Waco. In A Cupcake

Life According To Chevy

The Love Of The Less Fortunate