‘I was thinking to myself how good this sleep was. I was snuggled up in my bed, all warm and cozy and cuddling with my sweet wife.  Then suddenly, my eyes popped open when I remembered that my wife is not even on this trip with me. My wife is at home. Then who is this warm body that I’m nuzzled up to?

Then I realized I was spooning with Reba.’

Reba is a red 92 lb resident dog at the Blue Basin Lodge on the side of Reelfoot lake. There her job description is comprised of ( but not limited to) overseer, security, entertainment, and chief cuddler.  Reba’s owner gets a good chuckle when he tells me that story about Reba’s sneaky cuddling with one of his previous customers. 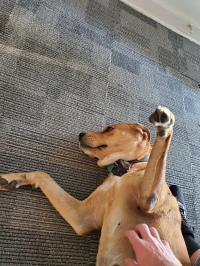 Anyone staying at the lodge on the peacefully placid lake filled cypress trees and stumps is drawn to Reba. You simply cannot help yourself.  Reba wiggles herself into your life and before you know it, she’s setting at the end of your bed begging for a belly rub.

Her owner Ken Jones, the proprietor of the lodge, tells me that Reba wandered up to their house around 3 years ago with a chain around her neck where she had broken loose from somewhere. Reba then began staying at their house almost every night. After some searching, he found the owner nearby who said they could have the dog if they wanted it. She was hard to contain. She had broken all of the chains they had put on her neck collar. Since she was red and friendly, his wife Lisa named her Reba; after Reba McEntire who’s red locks and voice of an angel have made her a famous name in country music.

Since coming to them, Reba has mounted quite a few stories at the lodge. She has been in many pictures of families and duck hunters staying at the lodge. Some families actually cook for Reba when they come there. 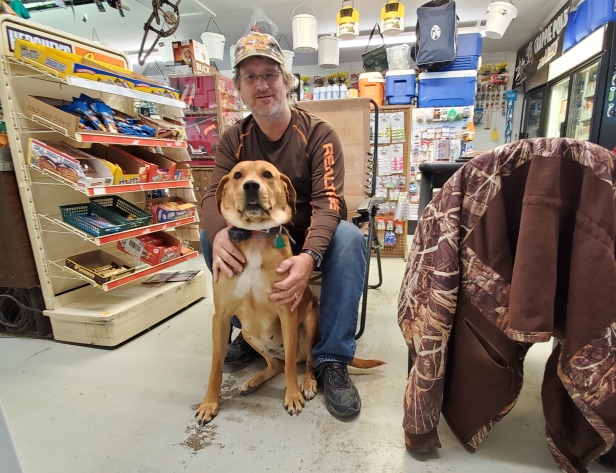 On her less wholesome side, Reba has been known to make off with some of the fish that had been caught in the lake while the fishermen were unloading their boats. But one look at her smiling face and wagging tail and all is forgiven.

So if one day you’re lonely or you’re feeling sad or stressed and you need to get away, drive to Reelfoot lake and find the Blue Basin Lodge.  I’m pretty sure there you’ll find what your soul was in search of: a chair by a still lake, a good man to talk to, a cup of hot coffee and some canine love therapy from Reba.

You can tell that Reba is serious about it as you stare into her hazel eyes and see that she’s trying with all of her heart to make you happy.

Because we all know that

That’s the best that I can tell about it,

2 thoughts on “Everyone Loves Reba”

Please leave a reply, Mark would love to hear it. Cancel reply

Search this blog for stuff

37 Things To Do Before We Get Old

Click To Read The Top Viewed Posts On My Blog

Americana Is Alive And Well. In Waco. In A Cupcake

Life According To Chevy

The Love Of The Less Fortunate